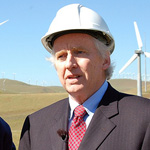 Dr. Walker joined enXco as Vice Chairman and CEO in October, 2002. enXco, Inc., is a leading US developer, owner and operator of wind energy projects. enXco manages and operates over 4,000 grid-connected wind turbines under long term contracts for such customers as MidAmerican Energy and SMUD. enXco owns nearly 300 MW of operating wind projects and is developing 150- 300 MW of new wind projects per year in the US. enXco is 100% owned by EdF Energies Nouvelles, which is the renewable energy arm of Electricite de France. Dr. Walker has over 30 years experience in the energy industry as a developer, consultant and senior executive in public and private entities. He has been involved in the independent power industry since the early 1980s as Vice President of MCR Geothermal, governmental affairs representative to Edison Mission Energy, principal of QED Research, and co-founder of Princeton Development Corporation, an independent developer of energy efficiency and renewable energy projects in the US and Europe. He developed some of the first wind parks in Greece, and has pioneered wind project development in Turkey and Mexico. Dr. Walker served as an energy advisor in the Executive Office of the President in the Nixon and Ford Administrations. He also served in various senior positions in the California Energy Commission, twice being appointed to the Commission by Governor Jerry Brown. Dr. Walker has a Bachelors Degree in Physics from Princeton University and a Doctorate in Business from the Harvard Business School.