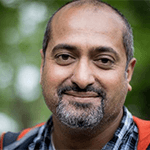 Parin Shah leads up the Asian Pacific Environmental Network’s (APEN’s) environmental justice policy portfolio. At APEN, Parin has advanced equitable energy and climate justice policy – including 100% renewables, air quality legislation, GHG reduction targets and EJ representation on state boards. Previously, Parin was with Green For All where he worked with cities and counties across the US on environmental equity policies. In 2004, he founded the Urban Accords Institute, which in 2005 co-hosted the UN World Environment Day in San Francisco out of which was developed the Urban Environmental Accords – a road map for creating sustainable cities. From 2000-04 as the President of the Commission on the Environment for the City and County of San Francisco, he co-authored ground-breaking policies and programs on climate change, environmental justice, wetlands conservation and restoration, zero waste, green buildings as well as food security. Parin has also developed and managed habitat restoration projects, horticultural education and job-training programs for formerly incarcerated youth and adults in San Francisco. He began his community work in Tunisia as a Peace Corps Volunteer. When he is not working or watching/playing basketball, Parin loves to get into the soil and garden with his nine year-old daughter in Oakland, CA.