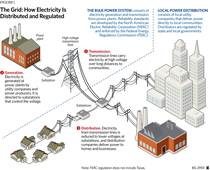 This program has completed and is no longer active.

The Fix the Grid Initiative aimed to educate the public and thought leaders about the risks and opportunities presented by a better integrated Western regional grid, both within the electrical system and as support for greater electrification of transportation and energy use in buildings.

The electrical grid in the Western United States and Canada, as currently configured and operated, is the greatest impediment to decarbonizing the Western economy. In order to achieve 1990 levels of carbon emissions, the West must bring its electrical grid up to the standards that exist in most of the rest of North America, and indeed, throughout the developed world.

Fix the Grid was a coalition of parties that recognized that the consolidation of multiple, disparate electricity markets into a well-organized Regional System Operator (RSO) was the fastest, cheapest, most effective means to enable a low-carbon electricity sector in the Western U.S.

The Fix the Grid Initiative developed and disseminated accurate information and analysis to support the establishment of an effective Western regional grid operator. Fix the Grid:

James Caldwell, Jr. is CEERT’s Senior Technical Consultant. His academic and professional background includes over fifty years of experience in the energy industry. For the past thirty years, he has specialized in renewable technology and project development including photovoltaic solar, concentrating solar thermal power, wind, biomass, and geothermal. He has been employed in technical and executive positions in the oil industry (Atlantic Richfield), the California utility industry (Los Angeles Department of Water and Power), the U.S. Department of Energy, renewable trade associations, and several large and small renewable re¬source developers. Jim has a BS degree in Chemical Engineering from Stanford University and an MBA from California State University at Long Beach.