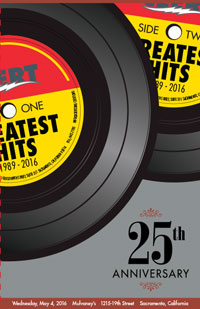 On Wednesday, May 4, 2016, a convivial assemblage of 120 current and former board directors, staff members, consultants, affiliates from environmental and public interest NGOs, associates of new energy technology companies, and public officials gathered to commemorate the official 25th Anniversary celebration of the founding of CEERT.

Over cocktails and dinner at Mulvaney’s B&L in Sacramento the clean energy veterans shared stories and testimonials about the many debates and milestones in sustainable energy policy CEERT had participated in during its generation-long existence.

The commemoration was sponsored by many of the organizations, companies and individuals that have been in the forefront of the fight against global climate change and fossil fuel emissions. Dr. James Walker, former California Energy Commissioner and vice-chairman of EDF Renewables served as the Master of Ceremonies.

The program for the evening’s festivities featured a “CEERT’s Greatest Hits” theme, outlining the landmark policy battles CEERT had led or participated in over the past 25 years, beginning with the 1990 order by the California PUC for a renewable energy competitive procurement up to and including the 2015 adoption of SB 350, which mandated 50% of California’s electricity supply be generated by clean energy resources by 2030.

The evening was concluded by remarks by V. John White, CEERT’s executive director and founder, who recounted some of the organization’s major successes and promised that there would be more clean energy “hits” to come in the future.